Tony White has a video message for Vols before the Sweet 16: 'I love you guys'

This year's history-making Vols team has a special cheerleader in their corner, and he's delivering messages of strength and support as the team heads into the Sweet 16.

From a hospital bed as he battles leukemia, Vols basketball legend Tony "The Wiz" White shared a message with ESPN's Chris Low.

In short, he wants them to fight hard for all 40 minutes.

Vol legend Tony White, aka the Wizard, is fighting leukemia and doing so with @Vol_Hoops very near and dear to his heart. He sent this video to the team prior to the Vols’ Sweet 16 matchup with Purdue. Keep the Wiz in your prayers. #51 🙏 (original Tweet on Twitter)

And he sums up the excitement for the team and the encouragement they've given back to him:

"I love you guys. I believe in you. Go Big Orange!"

White made a connection with the current Vols team when they visited him in a Nashville hospital days after he received a bone marrow transplant. He reminisced with coach Rick Barnes and crew about his March Madness memories from the later 1980s. 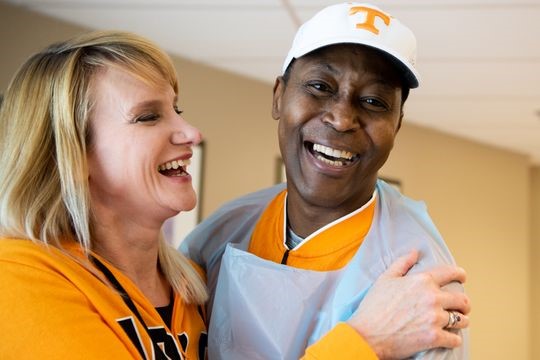