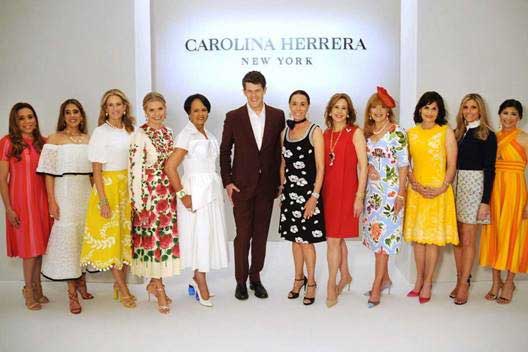 The 37th annual Houston Chronicle Best Dressed Luncheon and Neiman Marcus Fashion Presentation was always destined to be one for the books. Sue Smith and her late husband Lester made sure of that when they agreed to co-chair the stylish spring fundraiser benefiting March of Dimes. They had one condition: that it would be history-making.

So the couple issued a seven-figure challenge. If the 2019 Best Dressed luncheon could raise a record $1 million by event's end, the Smiths would match it.

And on Thursday, the fashionable and philanthropic reaped the fruits of their charitable labor. Not only did they meet the $1 million goal, they exceeded it. The total amount raised tallied at $1,063,087. Add another million to that amount.

Everyone who's anyone celebrated the big news -- including Best Dressed alums, March of Dimes state director Darcie Wells, and sponsor The Woman's Hospital of Texas CEO Ashley McClellan. Schatzman sparkled in primrose pink as she delivered fundraising updates from the podium.

Everyone was accounted for -- except Lester.

The well-known West Texas oilman, ballroom dancer and charitable force succumbed to his illnesses earlier this month. After three cancer battles and a double-lung transplant, one of Houston's biggest and brightest personalities was gone, though not forgotten.

His "go big or go home" spirit rippled through the Post Oak at Uptown ballroom like wildfire. Daughters Limor Smith and Shelly Hendry did their part and then some. The twosome served as raffle auction chairs and amassed an unrivaled list of prizes, from a year of complimentary valet parking at Neiman Marcus and $5,000 shopping sprees to high-end Margot McKinney jewelry and a table for 10 at the 2020 Best Dressed luncheon.

Sue Smith, a pillar of strength, stood tall as the sold-out crowd gave her not one, but two standing ovations.

She later delivered the most important announcement of all, that a record-shattering $2,063,087 would help further March of Dimes' mission to improve the health of expectant mothers and their babies.

Carolina Herrera models stomped the runway show presented by Neiman Marcus with extra moxie. A sartorial rainbow of hot pink, shocking orange and jewel-tone mules electrified the catwalk. The fashion house's young new creative director, Wes Gordon, may have had something to do with that. His youthful energy has ushered in a season of change and renewed spirit.

The intriguing designer took his seat next to Lynn Wyatt. It was a fitting end to a chapter closed, and a promising start to something new.