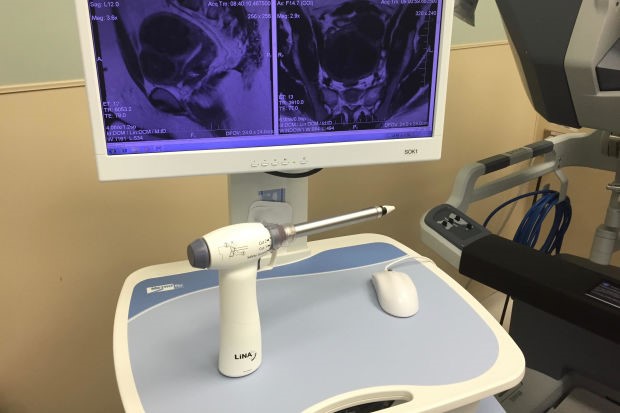 Piedmont Atlanta Hospital lets gynecologists use laparoscopic power morcellators with informed consent from patients. In the same city, Emory Healthcare has halted use of the gynecological cutting tools, which regulators have warned can spread hidden cancers, in its hospitals.

The contrast underscores a debate simmering five years after the Food and Drug Administration first advised against using morcellators, which until then were widely used in minimally invasive hysterectomies and to remove uterine growths called fibroids. The agency later amplified its warning.

While the FDA stopped short of banning the devices, some gynecologists believe the agency overstated the cancer risks and that morcellators remain useful tools. Others have left the devices behind, in some cases because their hospitals banned them.

“I honestly can’t believe that I would ever go back,” said Michael Randell, an Atlanta gynecologist who operates at an Emory facility. Forced to stop using morcellators in 2014, he now puts fibroids into a bag while still in the body and cuts them with a knife through minimally invasive incisions.

A Piedmont spokesman declined to elaborate on that hospital’s rules, beyond saying some independent physicians use morcellators there. Bans appear to be common. HCA Healthcare Inc., which has roughly 300 U.S. hospitals and surgical centers, maintains a companywide morcellator prohibition, for example.

This risk was highlighted by Amy Reed, a Boston anesthesiologist who had a morcellator-aided hysterectomy in late 2013, only to learn the procedure had worsened an aggressive form of cancer called leiomyosarcoma. The mother of six, who became a fierce advocate against morcellators, died in mid-2017 at age 44.

Her husband, Hooman Noorchashm, continues the anti-morcellator campaign. His family is suing Karl Storz GMBH, the company that made the morcellator used in Dr. Reed’s surgery, and won’t accept a settlement unless the company voluntarily stops selling the medical device.

Erin Harris is battling an aggressive form of uterine cancer. She had a fibroid-removal surgery with a power morcellator in July 2017. PHOTO: ERIN HARRIS

“Should we receive clinical data demonstrating that using a containment system reduces the risk of cancer spread, we could take steps to limit the use of power morcellators to those with a containment system,” an FDA spokeswoman said. The concept hasn’t been proved, but studies are continuing, the agency said.

Morcellators became popular because they helped gynecologists solve a basic problem: how to remove large masses without big incisions. But recently published data show gynecologists haven’t made a long-term shift back to open surgery, suggesting many have found alternatives to morcellators.

Ted Anderson, president-elect at the American College of Obstetricians and Gynecologists, said he hasn’t used a morcellator in about four years after using it roughly 3,000 times in his career. He believes the devices could become more regulated and adapted for use with containment systems in the future.

Some gynecologists say the morcellator should remain in operating rooms. “Morcellators are not banned and represent an option for caregivers in certain, select situations,” Dr. Brown said.

There are also gynecologists, along with their professional organizations, who back research they say shows the FDA significantly overstated the prevalence of hidden cancers. Women and their doctors may weigh those odds against the risks of open surgery when deciding whether to use a morcellator.

The FDA stands by its estimate: One in 225 to one in 580 women undergoing fibroid surgery may have hidden sarcomas. “Our recommendation against the use of this device to remove fibroids in the vast majority of women is appropriate and critical to better protecting these women,” an FDA spokeswoman said.

Ellis Hospital in Schenectady, N.Y., is among the facilities that continued using morcellators after the FDA’s warnings. Erin Harris, then 37, had large fibroids removed there in a morcellator-aided procedure in July 2017.

She was significantly overweight and diabetic—factors that can complicate invasive surgery—and her youth made cancer less likely. Her medical records said she met the criteria for power morcellation.

The doctor wrote that he used a morcellator inside an endoscopic specimen bag to remove her fibroids. It isn’t clear what bag he used, and Ellis Hospital has declined to discuss the case.

Pathology testing right after her surgery didn’t find cancer. About 10 months later, Ms. Harris was back at the doctor’s office with recurring pain caused by growths that were now scattered around her abdomen and pelvis. After follow-up surgery in August 2018, pathology testing found leiomyosarcoma, the same cancer Dr. Reed had.

It isn’t clear from Ms. Harris’s records when her cancer began growing or whether morcellation spread it. Ms. Harris, who continues to battle the aggressive cancer, fears the morcellator worsened her outlook.

“I think it definitely helped stir the pot,” she said.

“However, we have paused the use of the procedure while the FDA and other organizations across the country continue to gather and review data,” he said.

A device called a laparoscopic power morcellator, which many doctors have used to remove uterine fibroids, has sparked furious debate in the medical community. Why? WSJ’s Jason Bellini has #TheShortAnswer. (Originally published Sept. 22, 2014)

Write to Jon Kamp by email