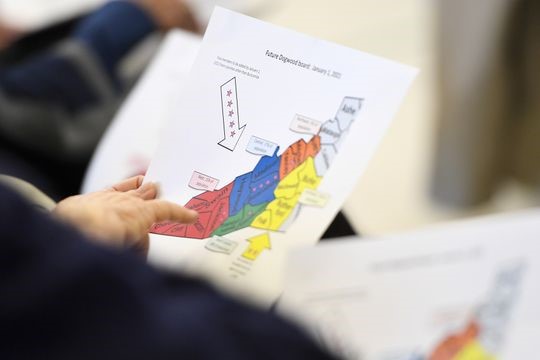 Attendees look over maps of the composition of the future Dogwood Health board during a press conference with North Carolina Attorney General Josh Stein at the Murphy-Oakley Recreation Center on Jan. 16, 2019. (Photo: Angeli Wright/awright@citizen-times.com)

ASHEVILLE — The successor foundation borne from the $1.5 billion Mission Health sale to HCA Healthcare has its sight set on funding "bold" and "audacious" grant requests when it begins its first cycle next year.

Now in its second full month of operation, the Dogwood Health Trust continues to build capacity ahead of launching an annual cycle that could award up to $70 million to organizations in Western North Carolina, its board chair Janice Brumit told the Council of Independent Business Owners this week. Part of that involves finding its first chief executive — a process it began by hiring a search firm last month — as well as identifying an independent monitor to hold HCA to the terms of its sale agreement.

Brumit, of Brumit Restaurant Group and formerly a Mission board member, said Dogwood ultimately favors creativity in grant applications in service of funding something "so compelling it will change the face of the region."

Grants in Buncombe and beyond

But as needs — and abilities to carry out grants — differ in Buncombe County from much of the 17 other counties it serves, she said DHT wants to work with applicants to use funding as effectively as possible.

Outside of Buncombe, Brumit said Dogwood wants to provide grant opportunities, but acknowledged some counties like Clay don't have the same volume of nonprofits as Buncombe and need additional help.

"We don’t want to leave anyone out, but we also want them to be successful," she said.

"We want people to be healthy and live their best lives, fulfill their potential and getting jobs, helping to support their families," she said. "All of these things are things we can do to upstream that don’t impact your health care dollars."

Throughout the sale process that began roughly a year ago, Dogwood was billed by Mission leaders, including Brumit, as a major benefit of the acquisition of the Asheville-based, not-for-profit system by HCA, a for-profit headquartered in Nashville. Mission's board of directors launched the beginnings of the foundation in July after formally incorporating it in May.

Brumit and early DHT organizers tasked the organization with funding initiatives addressing social determinants of health, a broad set of conditions in a person's life such as food insecurity, transportation or poverty that impact their health.

It has operated in its infancy with a small board, primarily made up past members of Mission's board and other community notables. That board drew heat in its earliest days for its racial, gender and geographic makeup critics say was not representative of the population in the region. It has 12 members — seven men and five women, most of whom are white. It soon may add another member from the eastern part of the region, Brumit said.

Board can be more transparent now

She remarked in her March 28 presentation that the local press "has not been particularly kind to us getting started," which she attributed to nondisclosure agreements signed by Mission employees involved in the sale.

"The information that was getting out in the community was not all we wanted to be out there," she said. "Also, it led to an urban legend that talked about a lot of things that weren't true or were misconstrued in the media.

"Now we're in existence and we can talk transparently and freely and we can tell you what's going on." 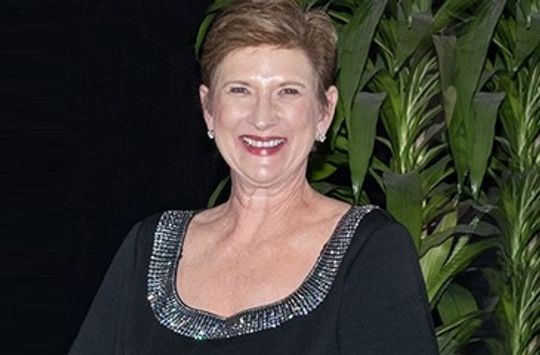 She addressed CIBO for about a half hour, taking more than a dozen questions at the meeting at Eliada Home, a nonprofit organization off New Leicester Highway.

Among the topics of discussion: