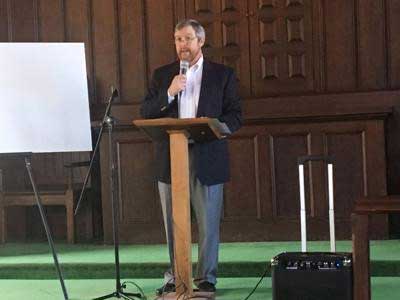 Rome Mayor Bill Collins announced Tuesday that he and Commissioner Craig McDaniel will represent the city on a Hope Village development committee.

“This is a huge undertaking and it fills a big void in our community,” Collins said. “It’s a wonderful idea that they invited local people to the table.”

Global Impact International is spearheading plans to re-purpose the 132-acre campus of the former Northwest Georgia Regional Hospital to address the societal problems of poverty, addiction and mental illness.

President and CEO Jeff Mauer told the commissioners at their Monday caucus that services in the “city within a city” will run the gamut from prevention and education to treatment and transitional support. The nonprofit already runs Restoration Rome, a collaborative facility dedicated to foster care issues.

Per a licensing agreement with the state, the blueprint for Hope Village — including the services, construction plans, partnerships and financing — will take about a year to put together.

“We don’t necessarily need cash, so we could use some in-kind support,” Mauer told the board. “We’re establishing a development committee with the city, the county and our medical community to see how we can work together out there.”

“The hospitals are all working on projects that would be a great fit,” he added.

Plans are for Mauer and his wife, Restoration Rome co-founder Mary Margaret Mauer, to first meet individually with the committee members to hear their thoughts before convening the committee as a whole.

“Hope Village will include an emergency receiving center for people in a mental health crisis,” he said. “Savannah has one, and this will be the second in the state.”

Global Impact is using a comprehensive model developed in Kentucky under its former governor Ernie Fletcher. Jeff Mauer said they will build the Hope Village program, then put out a call for providers.

To draw up the funding model, they’ve hired Fahe, a Kentucky-based organization that links nonprofits, investors and government resources to help Appalachian communities.

“Recovery Kentucky uses low-income housing tax credits, block grants, a number of funding streams,” Jeff Mauer said. “All the Kentucky centers are sustainable due to the services provided to the state.”

The plans for Hope Village also include internal sustainability, as a “tech-integrated regenerative” entity with its own water, sewer, food and other necessities, he said. The operations are meant to provide jobs and job-training for the residents receiving services.