Belmont University partnering with HCA to create school of medicine

NOT FOR EXTERNAL DISTRIBUTION 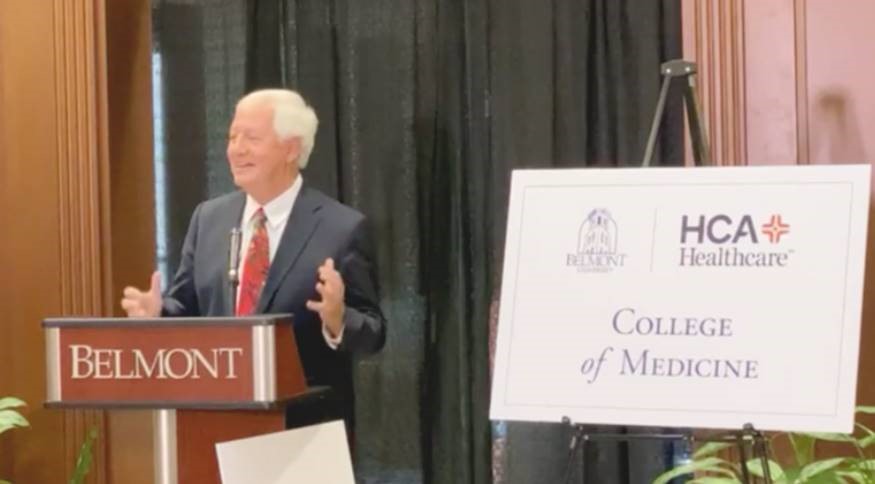 Last weekend, Belmont University President Bob Fisher’s granddaughter told him she wanted to go to school to get her medical degree.

“[She] said, 'Well I want to go to Belmont but I guess I can’t because they don’t have a medical school,'" said Fisher, who couldn't reveal the school's plans. “Caroline,…this is for you.”

On Thursday, Belmont announced it will launch a new college of medicine in partnership with Nashville-based HCA Healthcare Inc. The university will launch a “nationwide search” to find the school’s first dean.

Officials did not say when the school would begin accepting students. The school will still need to seek accreditation.

HCA's local health system TriStar Health will provide the clinical elements needed for the college, according to a news release, including clinical clerkships for third year students and opportunities to shadow physicians during clinical electives for fourth year students. HCA will also support members of its medical staff interested in faculty positions at the new college. It's not clear if HCA is supplying any financial support to the school.

Fisher said the college will help address the physician shortage in the U.S. and is aligned with Nashville’s largest industry.

“This college makes a lot of sense for Belmont and the timing is just perfect,” Fisher said. “The college is very consistent with Belmont’s strategic intent over the last several years, as we seek programs that feel at home in Nashville. … We all know how huge HCA is but also how huge health care is here in Nashville.”

HCA (NYSE: HCA) is Nashville's largest publicly traded company and the nation’s biggest hospital operator, with $51.3 billion of revenue in 2019.

Belmont, which has an enrollment of nearly 8,500 students, already offers several health care related degrees, including nursing, public health pharmacy, physical therapy, occupational therapy and a health care MBA. The university has identified a "prominent" site to house the college of medicine, according to the release, as plans are being developed for an approximately 150,000-square-foot building.

“Belmont is the perfect university to be seeking a new college of medicine,” former HCA CEO and Belmont alum Milton Johnson said. “This university is devoted to educating the next generation of health care leaders.”

Fisher said Belmont and HCA have a long history of working together, noting that founders Jack Massey, Thomas Frist Sr. and Tommy Frist Jr. have always been there to help the university. Belmont’s school of business bears Massey’s name, HCA donated $7.5 million in 2004 toward the construction of a college of health sciences building and the hospital operator is acting as the official health advisor for next week’s presidential debate on campus.

“What an opportunity this is. That’s what its all about is this opportunity for young people to pursue their dreams and help other people,” Fisher said. “That’s the really cool thing we’re doing here.”